Categories Menu
Home » Blogging from the Field » Thoughts from Day One 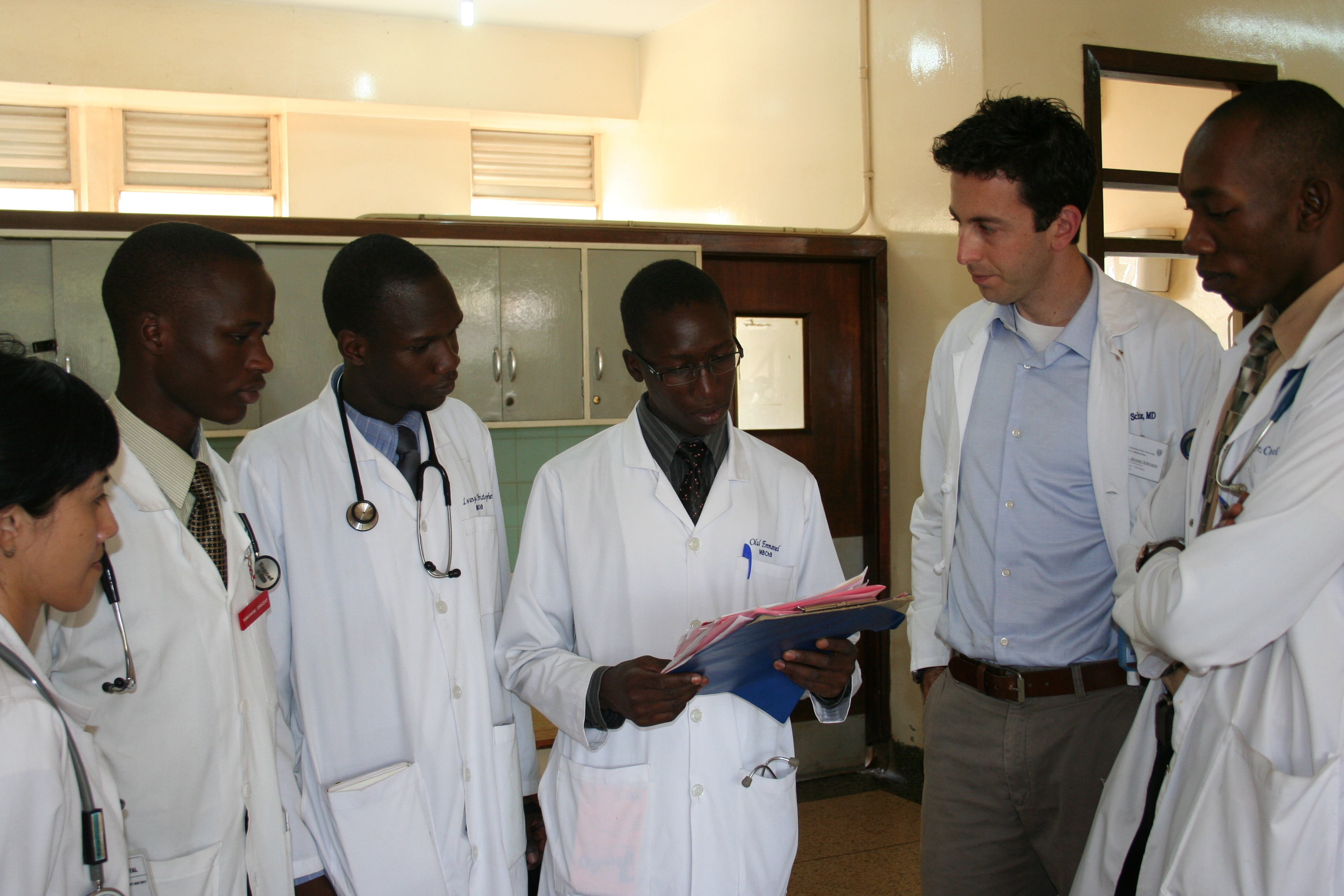 Thoughts from Day One

Thoughts from Day One

I was seated at a small desk against one of the long walls of this large rectangular room. Before me was a never-ending swarm of activity, full of very sick people — everywhere. This was my first morning at an African hospital.

I had been to Africa several times for pleasure and for study as an undergraduate. But this time I was a medical student, fresh out of 3rd year and I was to spend a year in Uganda on a clinical research fellowship. This day, the first of only 2 weeks I spent on the medical wards at Mulago Hospital before shifting up the hill to the considerably cushier confines of our research collaboration clinic, would prove to open my eyes —wide.

A senior resident was seated next to me, barely acknowledging my presence. That was OK. My anonymity provided me an opportunity to scribble notes into my handheld, recording my observations on this day when my naïvete would be at its peak. The resident sat while his interns came to brief him on the patients. This medical team of two house officers and two interns was carrying a patient census of about 60, forty of whom they had admitted the day before. This was the diabetes ward, yet most patients were not diabetic. This was just a ward — a ward with beds and space for patients.

It was an open-air ward. There was a warm breeze blowing in through the windows from the streets of Kampala. Back home we seal off our hospital floors, out of fear of contamination from the world outside. We go for entire shifts without breathing outside air. There, the fresh air circulates, ridding the wards of infectious agents and allowing the tropical air to let you feel like you are outside.

These patients, except for the very few with financial means, did not have the option of private or semi-private rooms. They were all together in this large open space. There were nurses, but far too few. The responsibilities of care fell on the attendants, of whom there was at least one per patient. Spouses, children, grandchildren, cousin-sisters, cousin-brothers were members of the extended family who were fulfilling their vital role in the African family structure. The patients were on foam mattresses, many of them torn, falling through broken bed frames — worse than my worst memories of summer camp bunk beds. The caretakers were everywhere, most of them sitting or lying on the floor on the multi-colored banana-fiber mats that are ubiquitous in that country. Others were outside, lining the grassy slopes of the hospital campus, cooking matooke and beans over charcoal stoves; or bent over bright-colored plastic tubs, legs straight, back straight and perpendicular to their legs, breasts dangling freely, kneading and scrubbing and squeezing dry clothes and bed sheets.

I turned my attention back to the action of the interns running the show in front of me. They had to ask each patient if he or she could afford the CT scan that was ordered, the chest x-ray, the ultrasound, drugs, syringes, latex gloves, alcohol swabs. Are you kidding me?, I thought. I had just been told the day before that here, at Uganda’s national referral hospital, care was free for all patients. Yet no one asked questions and there was nothing to do about it right now. I asked the question, however, of the house officer seated to my right; the one who had been ignoring me. The answer was that most months the hospital funds fall well short of lasting through the month.

This was the end of the first week of August.

Every other patient or maybe one in three was “ISS positive”. ISS, I quickly learned, stood for Immunosuppressive Syndrome. It was the euphemism used for HIV among health care workers back in the days when the disease was highly stigmatized. Though much stigma remains, doctors and nurses do not need to be as secretive these days. However, the acronym has stuck. It seemed to me on this first morning that every patient had some HIV-associated disease syndrome. Sure, there was plenty of diabetes, heart failure, and other medical troubles of a quickly modernizing nation. But in this country that has been so praised for slashing its prevalence of HIV, that very virus and its terrible complications ruled. A few days later an attending physician would ask on rounds, while standing before a patient hemorrhaging from the eyes and nose, Is it Ebola? Malaria also — every fever was presumed malaria, even in a place with infinite possible causes of fever. Malaria, it seemed, was everywhere.

Then, everything seemed so different to me. But now, as I reread my notes from the day, what I I notice most are the similarities. Strikingly, those similarities were where I least expected them — among the doctors. The interns and house officers feverishly writing notes in patient charts, using the same words and phrases that we use in the States. Their notes were written just like ours: chief complaint, history of present illness, past medical history, etc… I watch an intern writing a note. She has forgotten to ask the patient something and, frustrated, returns to the bedside to ask that important question. I know exactly how that feels, having done the exact same thing numerous times during my rotations. The interns were writing orders, the house officers were trying to find the right nurse to follow up on orders. Yes, it was much more chaotic than back home. True, patients and their family members had to scrape together funds to purchase the most basic of medical supplies. And, of course, the place was awash with TB, malaria, and HIV at rates dwarfing those at my home institution’s hospital.

Yet these young doctors, trained in a medical school 7,000 miles away from mine — a school with old textbooks, no online journal access, and in so many other ways, resource-poor — were asking the same questions, following the same thought processes, making the same clinical decisions, and climbing the same hierarchical ladder that we were back home. We were educated in the same humanistic fashion, taught to value the psychosocial dynamics surrounding each patient’s existence on earth. Our preceptors and upper-levels had trained us in the same physical exam skills, to listen to the lungs in the same places, to palpate the abdomen first shallow then deep. We knew that we should only order a test if we knew what to do with the result.

Yet the differences in resources and access to those resources for both patients and doctors are enormous between these two places. I was trained in the United States where we can run any test and never have to ask a patient if she can afford it. They were trained in Uganda, where they do not have access to most tests and where they always have to ask the patient to pay. In many ways, our homes are in two different worlds. But, more importantly to me at this early point in my career, was the realization that we were all doctors or doctors-to-be, that we were taking care of sick people, and that we were doing so in exactly the same way — on opposite sides of the world.