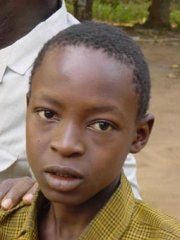 All stories are stories of patients treated through our clinics or related projects. Each shared story  is done so by permission of the patient.

Abdoulaye Camara lives in the village of Lakhata in Guinée Maritime located in the coastal region of Guinea. This village is located in an old and well-known Sleeping Sickness surveillance and treatment area. There were once many cases of Sleeping Sickness in the village of Lakhata and although today there are less, transmission still goes on. This is due to the population of numerous tsetse flies in this region.

Abdoulaye Camara has a love for fishing! He has been going fishing in the mangrove forest in his father’s pirogue since his early childhood. At first, he used to go with his father; but later, he went alone or with his buddies. Abdoulaye has his own pirogue now. He is a good fisherman who never comes back empty handed, always bringing fish for his mother to cook. Week-ends and holidays are great opportunities to spend the day in the mangrove in his pirogue.

Abdoulaye also goes to school during the week. He works very hard at school and is a good student. Abdoulaye is a quiet boy and has great determination to succeed, which is why he is much appreciated by his teacher. Abdoulaye speaks French very well and has been able to read, write, and count for many years now. Last year, Abdoulaye was 15, and is now a responsible young man. His fishing is a major contribution to his family’s welfare. When he has a good fishing day, he sells what is not eaten at home, bringing money or goods to his family.

During his fishing outings, Abdoulaye is often bitten by various insects like mosquitoes. He doesn’t think much of it since it happens so regularly. Recently, Abdoulaye was bitten by an infected tsetse fly which transmits Sleeping Sickness. He knows very little about this dreadful disease, except that some members of his community have become terribly sick and have had to go to a special center for treatment. Usually stings don’t itch for a long period of time, but this time, it is painful and he scratches all night. Within days, he starts to complain about terrible headaches, muscles soreness, and painful joints. Even walking becomes a great effort. He starts having fevers and has to stay home in bed instead of going to school. In the village, everyone thinks he has had an attack of malaria, which is not unusual in Lakhata. Everybody gets one sooner or later. On the village health worker’s advice, his parents are able to buy anti-malaria pills for him on the market. This seems to work, but a few days later, headaches and fevers return. As time goes by, Adboulaye feels worse.

Adboulaye tries to go to school every day; however, some days he has to stay home because he feels so bad. At school, Abdoulaye’s performance drops seriously. His teacher thinks Abdoulaye is becoming lazy. As days go by, Abdoulaye becomes agitated and his behavior is effected. He begins doing foolish things which make his classmates laugh. This irritates his teacher who was not used to such behavior on his part, and she punishes him often.

Because Abdoulaye feels so tired, he no longer desires to go fishing. His buddies no longer want him around because his actions are so weird and, inside, they are actually scared. Abdoulaye has lost a lot of weight and he feels extremely bad. At times, he doesn’t talk to anybody all day long. Sometimes he becomes upset, and argues and fights with his old friends. Abdoulaye does not often wish to eat, saying he is not hungry. His parents worry about this change in behavior. They admonish him, but Abdoulaye does not listen as he seems not to care what anybody says.

Abdoulaye now sleeps almost all day long, walking around making noises and speaking loudly at night, waking everybody up in the neighborhood. His parents are extremely worried. They decide to take him to the big hospital in the nearby town of Boffa to see the doctor. The doctor said there was a problem, but he was not sure what the problem was. So, Abdoulaye was sent to the laboratory for a check up. In the lab, his blood analysis discloses the presence of a large number of trypanosomes. Adboulaye has Sleeping Sickness. He is referred to the special center where the infection is confirmed. Adboulaye will have to be treated and he will be hospitalized.

Abdoulaye is now terribly affected by the disease. From the calm and composed boy he was, he becomes an agitated and boisterous guy. As he is being prepared for treatment, which takes a few days, he notices, in another room the body of a patient who had just died from Sleeping Sickness. This emotionally affects him and in the evening of that day, he decides that the body has to be burned. So, that night, he sets fire to the bed. The nurses have great difficulty putting the fire out. They now have to keep a very close eye on Abdoulaye, who has unexpected reactions and bizarre ideas. The nurses do not want to tie him down, like they have done with some other patients who have become very aggressive in the advanced stage of the disease, as is the case of Abdoulaye. The parasite, in this stage, has now entered Abdoulaye’s brain. Had his parents waited a little longer to take him to the hospital, he probably would have died of the disease or had the region not been under surveillance, treatment may not have been an option for Abdoulaye.

Worried, Dr Diakité Aboubakar, the doctor in charge of Sleeping Sickness patients, immediately starts treating him with Melarsoprol, a dreadfully toxic drug, but the only one available locally to cure the disease once it enters the brain. Fortunately, Abdoulaye survives treatments with this drug, his health progresses rapidly, and his behavior improves significantly. Although he becomes quieter, he no longer talks nonsense. After the nine painful injections over the thirty-five days at the treatment at the center, he can go home. He will have to be closely followed for 2 years by the doctor to ensure that he has definitely recovered.

Recently I was able to see Abdoulaye, about one year after his stay at the treatment center. Physically, he feels well. He no longer has headaches or fevers and in general, just feels a lot better. However, he remains agitated and nervous. Back home, he tries to return to school, but cannot concentrate on his work. Everything seems terribly difficult and complicated to him. He has lost his sharp ability to learn, has difficulty remembering, and simply cannot remember his lessons as he learns them.

His parents told me that they had to remove him from school because it had become too frustrating for him as a student. He was now a major problem for his teacher and for other students in this setting. Obviously, it is not a lack of good will, as Abdoulaye told me that he wants to go back to school, wants to continue studying, and wants to be with his old friends. He also told me, as he tried balancing himself from one foot to the other, that soon he will go back to school, that he will again be a good student, and that he will later become an “important” man and the best fisherman in the mangrove. However, nobody knows whether Abdoulaye will ever recover from the damage created by the parasites. Obviously, since he acquired the disease, his life has changed, and he is no longer the same boy he used to be.